Happy New Year!  A few days ago, December 29, marked the halfway point of our trip and when we started this post 2016 was a memory.  To recognize these milestones, here are some key trip stats:


Number of countries visited so far: 10.  Morocco, Portugal, Spain, the UK (Gibraltar), Italy, Vatican City, India, Nepal, Sri Lanka. Plus the US; we visited Coney Island during our 11 hour JFK layover on our way to Casablanca so we think that counts.

Number of flights: 16. Below is a shot of JFK to Casablanca, our second flight after tiring ourselves out with the Cyclone Coaster and Nathan’s hotdogs.

Number of stitches: 4, and here’s hoping no more. (After a slip and fall at the Taj Mahal.)

Number of oceans/seas: 3.  The Atlantic, the Mediterranean, and the Indian Ocean. Below are some seaside scenes from Portugal, Sicily, and Goa. 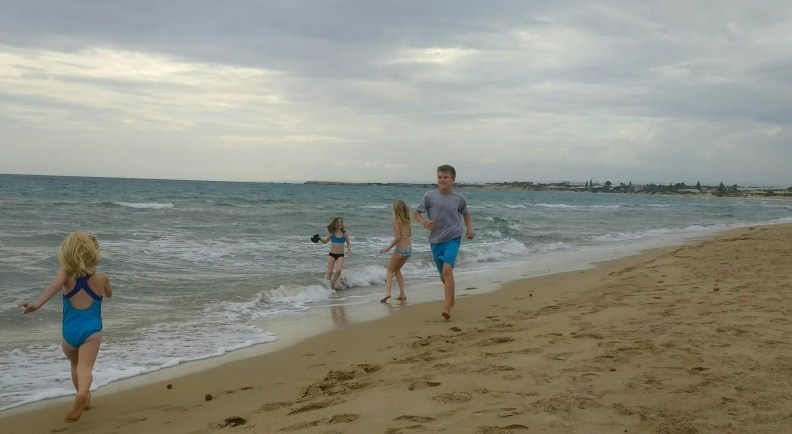 Number of boats: 6.  A car ferry to Sicily; a dolphin watch trip out of Panjim; a houseboat trip in Kerala; 2 SCUBA trips off the south coast of Sri Lanka; and a catamaran canoe in Habarana.

Number of pools enjoyed : 21.  Here is one of our favorites in Aljezur, Portugal in early September.  Seems like a long time ago. And another, more recent, near the elephant watch hut where we stayed in Sri Lanka.

Number of hospitals: 4. 3 in India and 1 in Sri Lanka. All for minor ailments, except the head thing.  Again, we hope that’s it.

Number of accommodations paid for but not stayed in: 6. Annoying but important to be flexible.

Number of accommodations actually used (hotels, hostels, homestays, teahouses, surf camps, Airbnbs, and recently a treehouse): 44. Below, the treehouse, a homestay in India, a villa in Sicily, a rooftop in Imlil, Morocco, and a surf camp in Tagazhout.

Number of days: 145 and counting. Here’s a shot from NYE, contemplating a series of Buddha images carved from a single rock in the 11th century. He says stay in the present.

Average number of days stayed at each accommodation: 3.3. We move a lot. Hoping to get that average up in 2017.

Number of animals we had never before seen in the wild: 10 (at least).  A tiger, elephants, lots of peacock, mongoose(geese?), water buffalo, crocodiles, 2 sea turtles, a wild boar, sambar deer, an amazing Sri Lankan stick bug, also just yesterday, and others I think I’m forgetting.

And here’s our tiger. Holly, not the guide, spotted him asleep in the dense brush just 3m from our safari Jeep.  So well camaflouged with his stripes, he’s hard to make out in this photo. But in person he was so close we could look right into his eyes when our hushed whispers woke him up.

Number of us who have felt just a little bit homesick sometimes: All 6.

Number of moments we’ve managed to cheer up and remember that it’s never a good idea to wish away time: Too many to count. Below:

— by William (with corny commentary from Alex)

One thought on “Travel By Numbers”